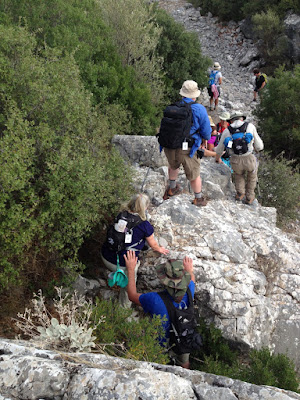 Ephesus is a huge site, to get a good overview
we walked on the top of the ancient wall
on top of a mountain 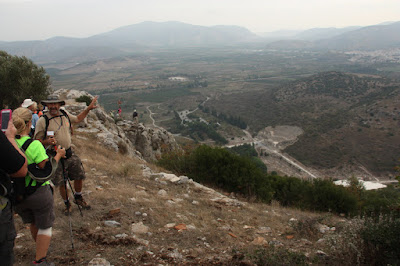 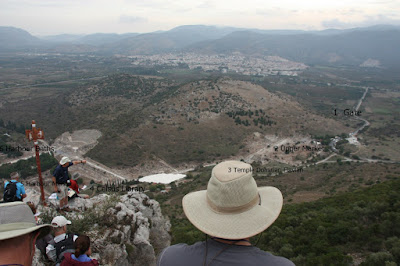 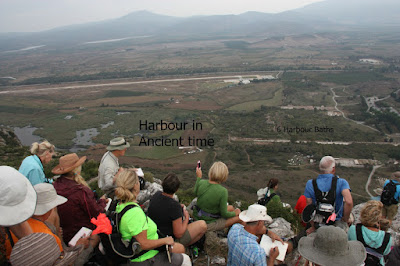 The Harbour has silted in a long time ago
but it used to come right up to the colonnaded street
called Harbour street
1 the gate, it looked more like the "Arc the Triumph"
in ancient times, very beautiful 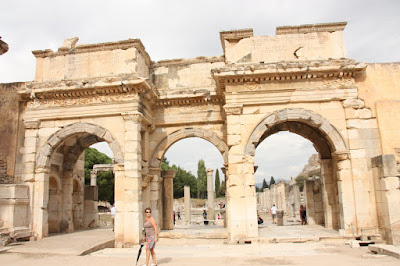 This is a better preserved gate in Ephesus, to the Market 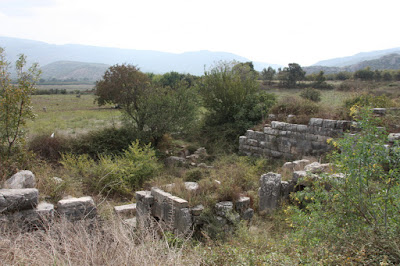 Only the very, very, rich could walk through the middle gate
To keep the privileges, the super rich wanted just a few children
The babies they got and didn't want they left outside the gate
Maybe that is why Ephesians is talking about adoption:
he predestined us for adoption to sonship through Jesus Christ 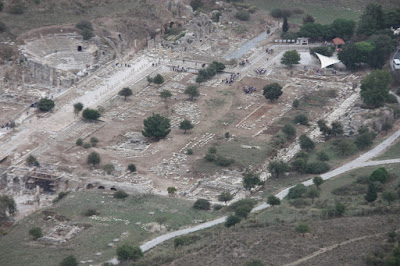 2 the Upper market place
over 1.000.000 people used to live in Ephesus and it was the slave
capital of the ancient world. about 10.000 slaves were traded here
every day. 1/3 of the people in the Roman world were slaves
You could become a slave:
1 by birth to slaves
2 captured in war
3 sentenced to slavery
4 raised by slavers (babies picked up at gate)
It seems that Paul writes about a change in attitude that is needed
so people may draw the conclusion that slavery is actually wrong
Slaves, obey your earthly masters with respect and fear,
and with sincerity of heart, just as you would obey Christ.
Obey them not only to win their favor when their eye is on you,
but as slaves of Christ, doing the will of God from your heart.
Serve wholeheartedly, as if you were serving the Lord, not people,
because you know that the Lord will reward each one
for whatever good they do, whether they are slave or free.
And masters, treat your slaves in the same way.
Do not threaten them, since you know
that he who is both their Master and yours is in heaven
, and there is no favoritism with him. 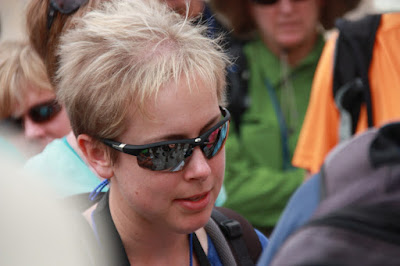 Liz had memorized all of Ephesians,
she recited portions throughout the day 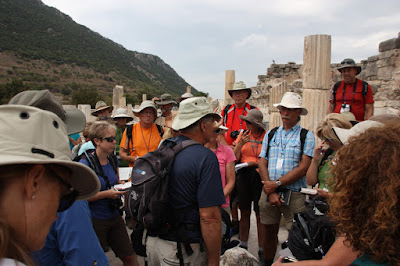 At the stock market, where the price of wheat was set for all Asia
the Emperors were worshipped
a requirement to be able to trade, was to worship the gods
Christians couldn't, only God is to be worshipped
the Gospel of Jesus Christ spread here with power:
Acts 19: When this became known
to the Jews and Greeks living in Ephesus,
they were all seized with fear,
and the name of the Lord Jesus was held in high honor.
Many of those who believed now came
and openly confessed what they had done.
A number who had practiced sorcery
brought their scrolls together and burned them publicly.
When they calculated the value of the scrolls,
the total came to fifty thousand drachmas.
In this way the word of the Lord spread widely and grew in power. 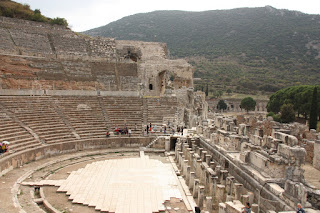 This 25.000 seat Theater also made it in the bible, Acts 19:
He says that gods made by human hands are no gods at all.
There is danger not only that our trade will lose its good name,
but also that the temple of the great goddess Artemis
will be discredited; and the goddess herself,
who is worshiped throughout the province of Asia
and the world, will be robbed of her divine majesty.”
When they heard this, they were furious and began shouting:
“Great is Artemis of the Ephesians!”
Soon the whole city was in an uproar.
The people seized Gaius and Aristarchus,
Paul’s traveling companions from Macedonia,
and all of them rushed into the theater together. 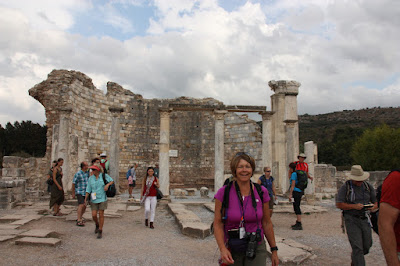 After a much needed break and lunch we continued
this is the church of Mary
Ephesus was female dominated
was teaching that Eve was created first, had female leaders
at all levels. later (413AD) at the counsel of Ephesus
decisions were made as of the worship of Mary 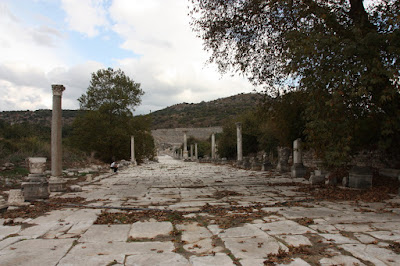 after lunch teaching went to John's time, when Domitian was in power
He demanded to be worshipped as god,
He came visiting Ephesus with full Roman power
John gives a warning in Revelation
a common picture for an empire is a beast:
The dragon stood on the shore of the sea.
And I saw a beast coming out of the sea. 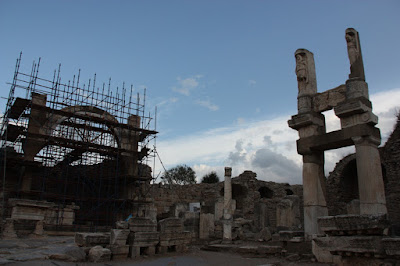 The Flavian Temple
where Domitian was worshipped 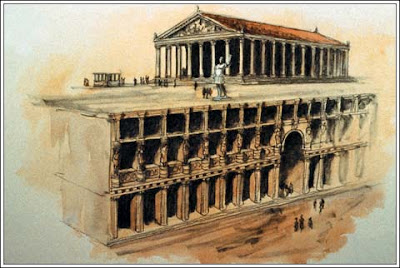 the way it used to look, all other gods underneath carrying
Domitian
another beast?
Then I saw a second beast, coming out of the earth.
It had two horns like a lamb, but it spoke like a dragon.
It exercised all the authority of the first beast 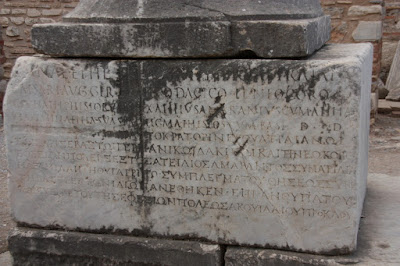 Domitian was so bad, he killed many Romans too
later his name was removed everywhere in the world
here you can see a removed name
on the 5th line Domitian is chiselled away
Church History records that the Christians stayed in
Ephesus
Romans 14: For none of us lives for ourselves alone,
and none of us dies for ourselves alone.
If we live, we live for the Lord; and if we die,
we die for the Lord. So, whether we live or die,
we belong to the Lord.  For this very reason,
Christ died and returned to life so
that he might be the Lord of both the dead and the living.
﻿
Posted by Anja at 1:45 PM